I am a Brooklyn-based video artist and this is my blog. My website and work can be found here!

Really loving this trend of the YouTube DIY girl group.

And then the variations on the theme…

Like Loading...
Standard
Kasia Cieplak-Mayr von Baldegg is my friend and she has a really cool job. That is why I chose to profile her for the #CoolJobs series. Kasia’s job is to search the internet for video #gems and then curate them for The Atlantic. She’s created one of the best online collections of hand picked videos I’ve ever scrolled through, which includes a few remixes by yours truly (#NBD). But before she dedicated her time to saving you time collecting videos you should watch over at The Atlantic, Kasia’s work in media included documentary television, advertising, and print. As a producer in the Viewer Created Content division of Al Gore’s Current TV, she acquired and produced short documentaries by independent filmmakers around the world. Post-Current, she worked as a producer and strategist at Urgent Content, developing consumer-created and branded nonfiction campaigns for clients including Cisco, Ford, and GOOD Magazine. She studied filmmaking and digital media at Harvard University, where she was co-creator and editor in chief of the H BOMB Magazine.
Kasia is awesome.
You’re awesome.
So you both should meet.

PopCulturePirate: Hey Kasia, what are three things you wish someone would have told you about navigating your career?
Kasia Cieplak-Mayr von Baldegg: One: You will get jobs that didn’t exist when you were a freshman in college. These sites called YouTube and Vimeo will change EVERYTHING.
Two: You’ll learn the most from the stuff you do outside classes — doing creative stuff with interesting people. You will get gigs on the basis of these projects, and no one will ever, ever ask for your GPA.
Three: When you’re unemployed or self-(un)employed keep working on your own creative projects. When you have a full-time job again you will really regret not having spent more time working on your own stuff.
PCP: Where do you go or what do you do for inspiration?
KCMVB: I spend too much time looking at screens so I try to escape as much as possible. I have a lot of weird ideas when I walk to work — it’s a long walk but I like it. I like dinner parties for inspiration too. Conversations, jokes, tangents, stories, insane schemes — dinner parties generate lots of great ideas.
PCP: What’s your average day like? I assume you’re on the internet all day but how do you not get sucked into the internet?
KCMVB: Not get sucked into the internet? Ha! My career got sucked into the internet so I think it’s too late. Curiosity powers the process of “curating” the internet and turning it into more internet — so I let myself click on ridiculous YouTube videos, Buzzfeed links, tweets, etc. If anyone knew how I really worked, they’d be appalled. But when I find something I’m excited about I can focus for hours — watching a video will lead to discovering Alexander Graham Bell’s tetrahedral kites, for example, or reading about how astronauts filmed the moon landing. Editing a video — forget it. It’s like playing a video game. If I can’t focus I use this handy little app called Self Control to block Twitter and Tumblr for 1 hour at a time. My work day basically cycles through phases of exploring and posting, with lots of emailing in between. I post the good stuff at theatlantic.com/video, and tweet the random, fun, crazy stuff tagged #randomvideos.
Amazing. Thanks, Kasia!

I love a good flow chart for simple, seemingly benign decisions. The hidden truth about these charts: they are difficult to make, especially when you’re personally invested in one outcome over the others. I personally have attempted to create many in an effort to cure indecision only to not be able to decide if I should perhaps go for another option. Like a bar graph. Or a pros & cons list. Oh, look at that. Another idea for a flow chart for simple, seemingly benign decisions. This one made by the wonderful Wendy M. 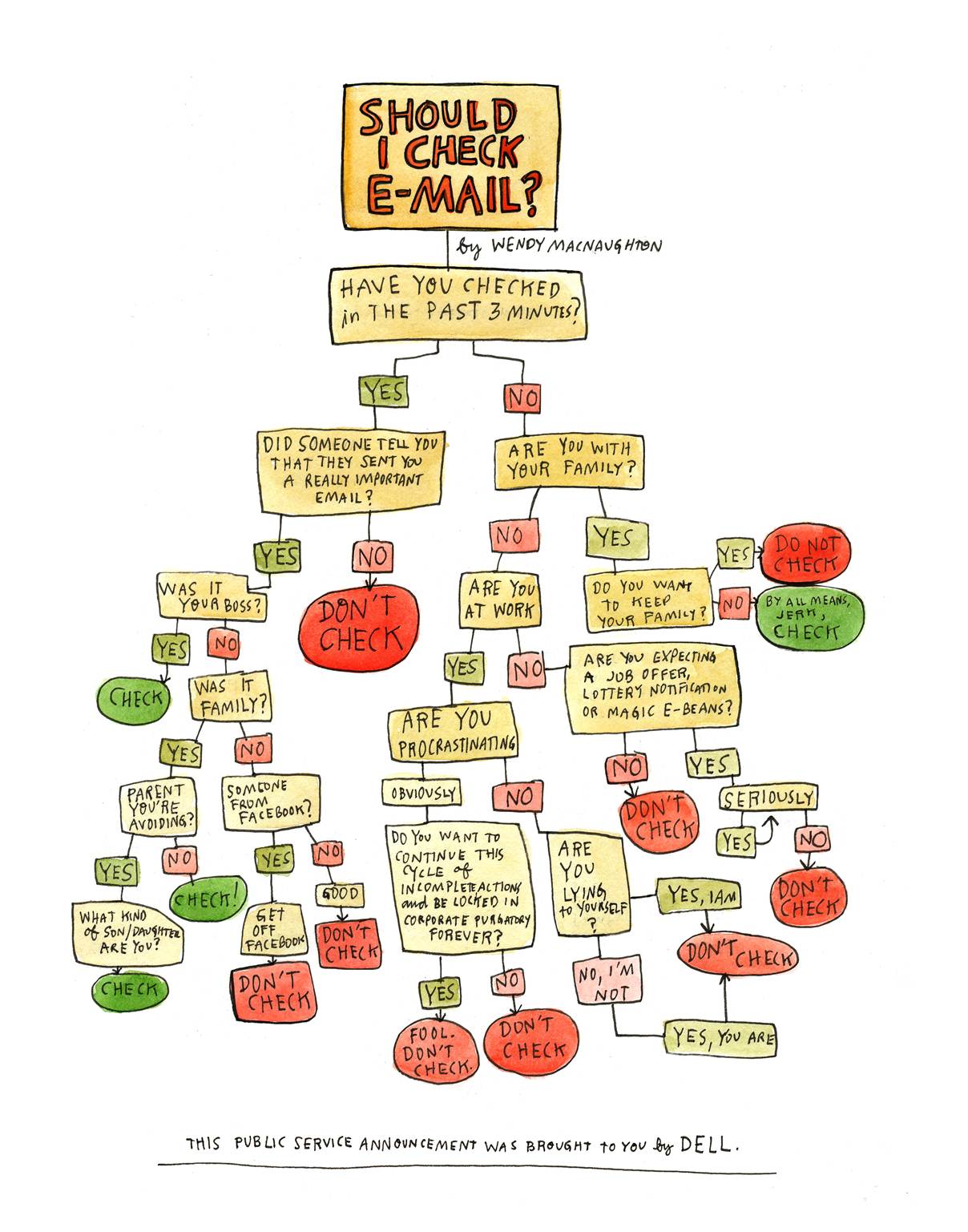